2019
A DAY OF GOLF AT RICCARTON
The Club's Annual golf outing. 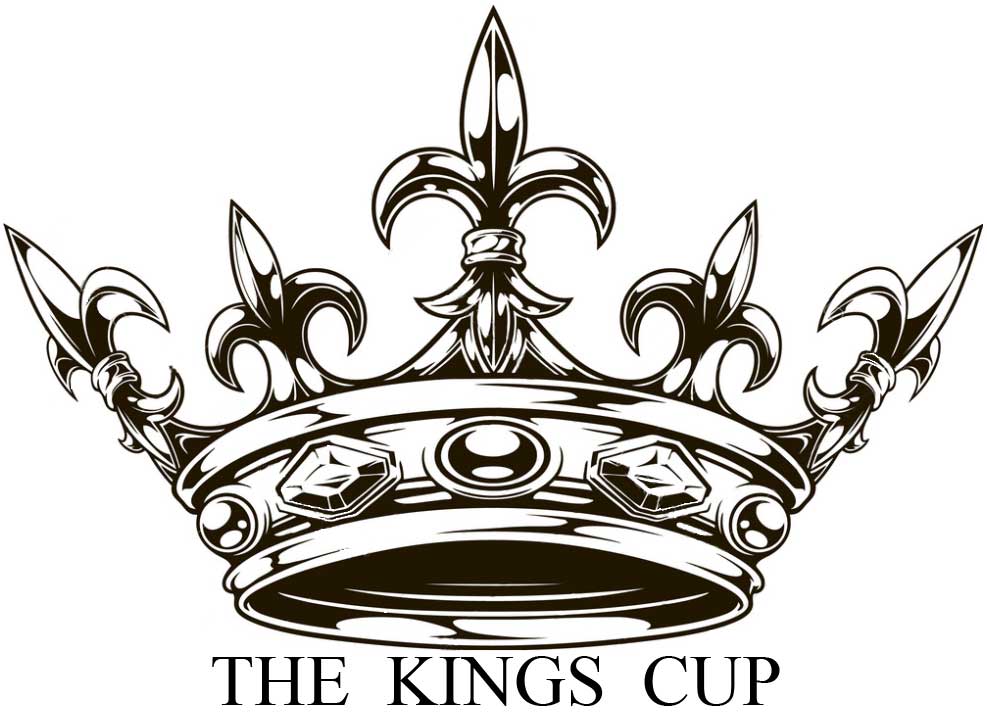 Writing this report with the rain pouring down I can’t help but think
“weren’t we lucky with the weather”.
Yes, it was that time of the year again;
a time when some grown men reveal more than they possibly should,
I’m thinking of George Strang’s legs.

That’s how good a day we got George had his shorts on, quite a sight.
Hamilton Golf Club was the venue again this year,
something I’m told David Lawson is keen to change!!
Sadly, Archie Craig and I were ruled out due to injury.
As I struggled getting myself out of the car due to a sore back;
I noticed Renee Murray walking to the clubhouse and thought to myself,
'I don’t have Renee on my list’,
so I enquired if she had just finished her round? No came the reply,
at which point I remembered my manners
and said how happy I was she was able to attend.
This was no lie as I needed another woman
to complete our six teams with one female player in each.
Everyone gathered in the bar for the customary rolls, soup and coffee.
Once the stragglers had arrived,
all were welcomed, and the teams announced.
At this point I’d like to thank all involved in helping me during the day,
whether giving out score cards,
counting scores, a bigger job than it might have been,(?)
and just generally making it the day it was.
The first team set off at 1.30pm with Marion Craig,
who had unfortunately encountered a dental issue
during the roll eating – as its leader.
I hope you have your smile back as you read this Marion!
Also in this team was Willie Baird
who thought no one had noticed his first “drive”
maybe not but they did see where you played your second shot from!
…..did it pass the Ladies tee??
Safe to say his driver remained firmly in his bag for the rest of the round.
Unable to take part, I decided to walk round giving the teams moral support.
It was as I was doing this that I saw something
I’d never witnessed on a golf course before;
and something not everyone can do.
On attempting a fairway shot,
Jim Craig managed to give his ball such a fright,
that it jumped up, with backspin
and landed further away from the hole not once but twice.
Other noticeable incidents around the course included
Alison Taylors attempt on the ‘nearest the pin’ hole,
where she managed to hit two balls into the woods
before hitting her third off the tee into a bunker.
Her trouble didn’t stop there as she took 4 shots to get out!!
It was at this point Big George threw her ball back to her
as he concluded her score wouldn’t be needed.
I found myself a safe spot to capture some pictures for this report,
just between the 6th green and 7th tee,
well I thought it was safe until Eric’s approach shot to the green
nearly took my head off.
I heard it hitting wood and quickly checked my head for bruising,
but I had been saved by a large tree
(still waiting on a shout of “FORE”)!
I’m sure there were lots of other close things but before I forget
James Baird chipped straight in the hole from off the green at the 6th 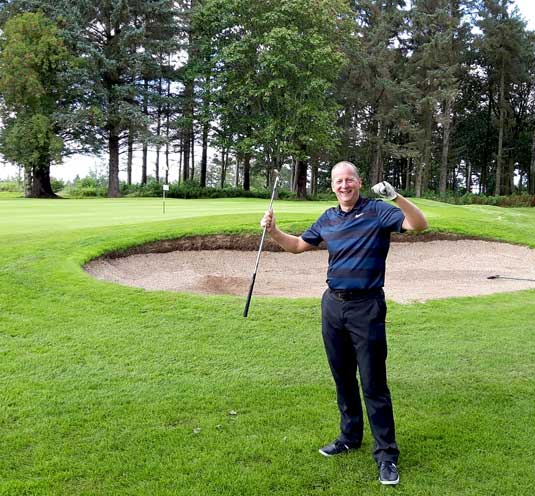 and Andrew Taylor (Alison’s man)
missed a quite make-able putt on the same hole.
With everyone happily on their way I decided it was time for a refreshment
and retired back to the clubhouse leaving George Brown
out on the course keeping everyone in order.
I had a great seat in the sun to watch the players on their return up the 18th hole,
some looking fresher than others!
Once in and changed everyone was able to enjoy a drink and a seat outside.
Yes, we really were lucky with the weather! 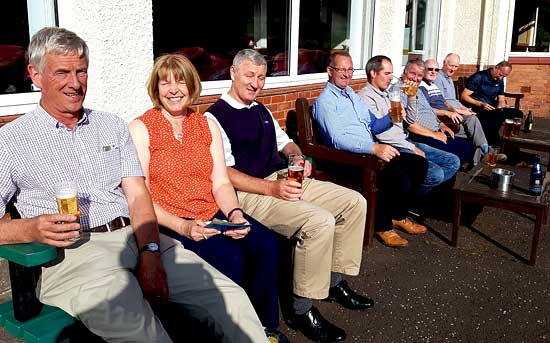 Refreshed, tea was served which Jackie Craig joined us for,
and with Marion still at the dentist
her tea was shared amongst the farmers.
After tea the prizes were presented by Margaret Brown our new vice president
ably assisted by husband George who was a great help during the day.

Ok the part you’ve been waiting on the winners and losers. It was good to see Jim Craig taking part for his first time,
I think.
And great to see Past president Willie back in the swing of things.
A good day had by all, and as was mentioned on several occasions
it is a FUN day,
hope to see everyone and more back next year wherever we go!
Yours
Willie King.